Game over for Flash

At the end of 2020 Adobe Flash will no longer be supported or available in most internet browsers. For those people involved in the eLearning and online training sectors, particularly those who have been around for a while and have courses that are a few years old, this change is likely to impact you.

For a period of time, a lot of online training courses were published in Flash. More recently, publishing tools have provided the option to publish in Flash, HTML5 or both.

Even if you have been proactive and published your courses in HTML5, some courses may still contain Flash elements. These elements include things like animations, transitions or effects or specific feature elements like the accordion feature or roll overs.

When most people think about their online training packages, the first reference point is SCORM. SCORM is a standard and is different to Flash. Your SCORM package can be published in Flash, or contain Flash elements.

The changes to the availability of Flash in internet browsers will affect your courses that contain Flash elements or that have been published to the Flash output type (typically the .swf file extension type).

From elements simply not working (meaning students might miss out on valuable information or engagement activities) to the entire package not loading or playing, it’s worth taking some time to understand what these changes could mean for you. 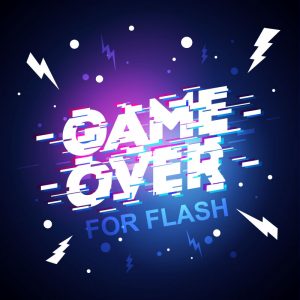 Below we have drafted some of the more common questions about the pending changes (and we’ll be adding more as they are asked). As always, we’ve tried to use plain English and avoid the ‘techy’ stuff.

If you still have more question or have something to add, please give us a call or shoot us a message.

This change is going to have a major influence not only to eLearning but to the internet as a whole. Don’t get caught out on January 1, 2021. Act today and remember if you’re unsure, we’re hear to help.

What is Adobe Flash?

Due to its flexibility, Flash has been a favoured platform to build SCORM packages, and animated and interactive eLearning courses for around the past 20 years.

Adobe has announced it will no longer update or maintain Flash after December 2020.

SCORM, which stands for Shareable Content Object Reference Model, is a set of technical standards for eLearning software products.

SCORM tells programmers how to write their code so that it can “play well” with other eLearning software. It is the de facto industry standard for eLearning interoperability. Specifically, SCORM governs how online learning content and Learning Management Systems (LMSs) communicate with each other.

SCORM does not speak to instructional design or any other pedagogical concern — it is purely a technical standard.

Further, your SCORM package can be published to a Flash output (ie your .zip file contains files with the .swf extension), or have Flash elements contained within.

What will replace Flash?

Flash has been replaced primarily by HTML5.

This is not unique to eLearning, but a range of other creative mediums including videos and animations used throughout the world wide web (the internet).

The short answer is it’s the current preferred global language for building webpages.

If you want a more detailed (and techy) answer, read below.

HTML5 is a markup language used for structuring and presenting content on the World Wide Web. It is the fifth and latest major version of HTML that is a World Wide Web Consortium (W3C) recommendation.

The current specification is known as the HTML Living Standard and is maintained by a consortium of the major browser vendors (Apple, Google, Mozilla, and Microsoft), the Web Hypertext Application Technology Working Group (WHATWG).

I told you it was going to be Techy!!

HTML5 was first released in public-facing form on 22 January 2008, with a major update and "W3C Recommendation" status in October 2014.

Its goals were to improve the language with support for the latest multimedia and other new features; to keep the language both easily readable by humans and consistently understood by computers and devices such as web browsers, parsers, etc., without XHTML's rigidity; and to remain backward-compatible with older software.

HTML5 is intended to subsume not only HTML 4 but also XHTML 1 and DOM Level 2 HTML.

For the same reasons, HTML5 is also a candidate for cross-platform mobile applications, because it includes features designed with low-powered devices in mind.

What if my course is published in both?

If your online training course has been published in both, the users web browser should select the most appropriate version for it to display.

All things being equal, a browser that does not support Flash, should ignore the Flash version and simply access the HTML5 version for its user.

Of course, what it should do, and what it will do can be unpredictable, especially when you add the variables of individual preferences and local settings.

Keep an eye on your user experience and if you notice anything weird happening consider republishing in HTLM5 only.

All future courses or course updates should only be published in HTML5.

Is HTML5 better than Flash?

The developer community will long debate which is better and in specific circumstances each will have its strengths, but it’s a moot point.

On December 31, 2020 Adobe (the maker of Flash) will stop supporting it. Most web browsers have already abandoned it. HTML5 is the modern standard.

Just as we moved from Vinyl to digital tracks for our music, the world has moved to HTML5 for website and in our case eLearning.

The short answer is it depends.

For user with older computers and/or browsers that haven’t been updated, they will likely see no difference. Their machines are ‘tuned’ to the older tech and should operate as normal.

For users with newer machines, or who have newer browsers, including recently updated browsers, the results with vary.

For some browsers, you may be able to enable Flash or add a plugin to play Flash files.

For others, the system may just hang, or the SCORM package may not load.

How can I tell if my course is Published too or contains Flash?

Unfortunately, we have been unable to find a simple answer to this question.

If you control the unpublished files (which you should), your publishing tool should provide an option for you to check for Flash content as part of the publishing process.

If your course is published in Flash, your student may have already been experiencing warnings over the past year or so, or you may have been telling students to enable Flash in their browser for some time.

Its also likely students accessing a course published to Flash especially via Apple devices, have been experiencing challenges for some time.

Where the entire course is published in a Flash format, you can right click on the presentation webpage. If you see Flash mentioned in the popup window that appears it is likely a Flash file.

You can also look in the .zip file (the file you upload to your LMS) for .swf file types. .swf is the Flash file type.

Another option is to disable Flash in your browser and click on your course to see if it opens.

However, if your course is published to HTML5 but contains Flash elements, the right click shortcut will not work. If you do not know, and do not control the unpublished files, you will need to review all components of your course in your browser with Flash disabled and look for errors.

Why does this matter to me?

Your eLearning courses should be presented in a format most suitable to your students.

In the same way you no longer provider your training packages on VHS tape (at least we hope you don’t), you really shouldn’t be providing material in an older or outdated internet format.

You need to update to the modern web equivalent.

Just as sending a student a package of VHS tapes would have them scrambling to find suitable hardware to watch, continuing to provide eLearning in a Flash format, or with Flash elements will have them trying to overcome the digital equivalent.

What do I need to do?

In short, you need to remove Flash content from your elearning library. This may involve republishing your Flash format courses, or removing the Flash elements from your HTML5 courses.

If you control your unpublished files (filename.cptx for Captivate or filename.story for Storyline) you should be able to simply open the files and republish in the new format.

If you don’t control the unpublished files, you may need to consider recreating the courses from scratch.

My eLearning is SCORM. Do I need to worry about Flash?

Most likely. You should at least check.

SCORM and Flash (or HTML5) are two very different parts of your course.

SCORM refers to the ‘framework’ of the code or how your course code is assembled, whereas Flash refers to the language its written in.

What if my users have old computers and browsers?

Anyone who has spent more than 5 minutes talking online with us knows we ALWAYS start with the student Avatar. That is a detailed picture of who your typical student is, including the devices and infrastructure they access your training on.

If your student base is known to have older computer and browsers that will not be updated, the change may not be as urgent.

You could choose to publish your courses in both, but republishing to HTML5 is the best action, as it should still work on the older devices, and future proof your courses if they get new machines or update their browses.

What option do I have if my training still contains Flash after the end of 2020?

You have several options.

The first is to do nothing.

This will most likely result in a disruptive experience for your students as they may not be able to access your course or may miss valuable information or interactions.

You could ask students to download Flash players or other work arounds, but this may become time consuming or confusing for those students who perhaps lack computer literacy.

The second (and suggested) is to replace any Flash elements and republish your courses in HTML5.

What if I don’t have time or need help?

If you don’t have the time or skills to check for Flash or don’t fully understand if these changes will impact you, we recommend talking to your eLearning developer or support professionals.

Of course, if you don’t have a developer or professional, our experienced team here at OTrain would be happy to help.

Does this change only affect mobile devices?

The recent changes and changes taking affect on December 31 will affect most internet connected devices including desktops, laptops and mobile devices (phones and tablets).

Mobile devices, especially Apple devices have not supported Adobe Flash files or elements for years, but during this time the developer (Adobe) has continue to support and develop the platform.

Providers of internet browers have continue to allow access to Flash via their browsers, but with Adobe's support now ending most (if they haven't already) are changing the way the browser deals with Flash files.

Have another question or need more information?
Give us a call on 07 3040 3310 or send us a message here